In Chapter 10 of my book, Euler’s Gem, I give Adrien-Marie Legendre‘s beautiful proof of Euler’s polyhedron formula: for any (convex) polyhedron with V vertices, E edges, and F faces, V-E+F=2. His use of spherical geometry to prove the theorem is extremely elegant.

However, as Peter Duren writes in the article Changing Faces: The Mistaken Portrait of Legendre (pdf) in the December 2010 issue of the Notices of the AMS, this image is NOT Adrien-Marie Legendre at all! It is a politician named Luis Legendre.

It appears that the source of the confusion was a book published in the early 19th century that featured prominent figures of the day including the political revolutionary Luis Legendre. As we can see above, the caption accompanying the portrait lists only Legendre’s surname (although his full name was in the index). Also in this book were portraits of the mathematicians Lagrange, Monge, Carnot, and Condorcet. So the confusion begins.

According to the article, the first known use of Luis’ picture for Adrien-Marie was in 1900, 67 years after the mathematician’s death. By that time, there was no one living who remembered what he looked like. 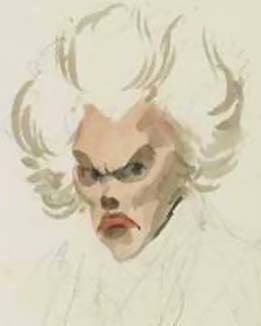 The first mathematician to find out about this error appears to be Gérard Michon, who learned of it in 2007. He has a website with more details about the discovery.

Since then, a new, bizarre portrait of Adrien-Marie Legendre has surfaced. It is the 1820 caricature by Julien-Léopold Boilly shown at left.

In a fortuitous coincidence, my book is about to undergo a new printing and it looks like I will be able to replace the picture of Luis with the caricature of Adrien-Marie. It will be nice to set the record straight.