I regularly watch the Science Friday video podcast. This week they had an interesting piece on potamology (OK, I just learned that word and wanted to use it in my post: potamology is the scientific study of rivers). The podcast showcased the work Christian Braudrick and Bill Dietrich of University of California, Berkeley, who achieved what had not been done before; they were able to create a meandering river in a laboratory setting.

Such rivers lazily snake back and forth through a gently sloping field. They change shape over time by continually eroding the outer bank of each curve and depositing silt on the inner bank. Occasionally two bends in the river come together, changing the topology of the river, and ultimately leaving behind an oxbow lake. 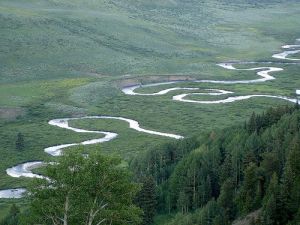 In passing, the narrator mentioned a very interesting mathematical fact about meandering rivers. It turns out that the size of a river cannot be determined by its shape on a map. In particular, if you looked at an aerial snapshot of a meandering river, you would not be able to tell whether it is the Amazon or a small neighborhood stream! I had to investigate this stunning fact.

It appears that nature forces certain geometric relations on the features of the river. Let

denote the length of a meander (the “wavelength”) and

be the width of the river (see my drawing below). The curves in a meander are roughly circular (rather than sinusoidal, for example). Let

denote the radius of curvature of a bend.

It turns out that these variables are almost always related in the following way:

I was stunned to learn this. What a beautiful fact. To see a remarkable scatterplot of the first relationship, see Figure 12.16 in The environment: principles and applications, By Chris C. Park (p. 374).

From what I can tell, the observation dates back to a 1960 paper by Luna Leopold, the Chief Hydrologist of the USGS.