We all know that the area of a circle is

and the volume of a sphere is

, but what about the volumes (or hypervolumes) of balls of higher dimension?

For a fun exercise I had my multivariable calculus class compute the volumes of various balls using multiple integrals. The surprising results inspired this post.

First some terminology. An

is the set of points in

(I’ll place the center at the origin for simplicity). For example, a 0-sphere is the two-point set

on the real number line, a 1-sphere is a circle of radius

in the plane, and a 2-sphere is a spherical shell of radius

-ball) is the region enclosed by an

-sphere: the set of points in

. For example, a 1-ball is the interval

It is possible to define “volume” in

it is length, in

it is area, in

it is ordinary volume, and in

it is hypervolume. Let

denote the volume of the

It turns out that the volumes of

-balls satisfy the following remarkable recursion relation. (I’ll prove this relation at the end of the post.)

. (If you know what the gamma function is you can express this as a single function,

The volumes of the

-balls in the first 15 dimensions are given in the following table.

If you look at the volumes of the unit balls you’ll see they increase at first, reaching a maximum in dimension 5. Then they decrease and tend to zero as the dimension goes to infinity. Strange!

in the numerator try to make

an increasing function, however the factorials in the denominator always dominate in the end.

Second, what is the intuition behind this limit of zero? One way to see this is to observe that to be on the boundary of the unit

-ball, we must have

, but for this to happen when

is large, most of the

‘s must be very close to zero. For example, the line

. On the other hand, the corresponding corners of the hypercube that inscribes the sphere are at

units from the origin. Thus the sphere fills up less and less of the hypercube that contains it. (Notice that the circumscribed hypercube has volume

, while inscribed hypercube has volume

My colleague informed me that this zero limit is related to the curse of dimensionality in statistics. Volume increases rapidly as dimension increases, so it requires many more data points to get a good estimate. As Wikipedia points out, “100 evenly-spaced sample points suffice to sample a unit interval with no more than 0.01 distance between points; an equivalent sampling of a 10-dimensional unit hypercube with a lattice with a spacing of 0.01 between adjacent points would require

Now I will prove the recurrence relation that I gave above.

Clearly the relation is true for

First recall that if a solid in

-dimensional space is scaled by a factor of

, then its volume increases by a factor of

. In particular, this implies that

Observe that the intersection of the

-ball is a disk of radius

centered at the origin (see image below). Use polar coordinates to describe points in this disk. Then the perpendicular cross section of the

-ball at the point

Thus we can compute

over the disk. We do so using polar coordinates. 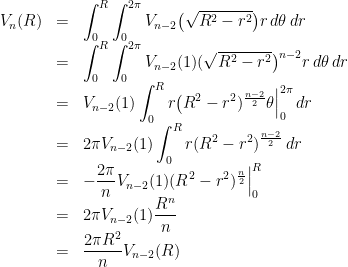