Web surfers love lists—best Twitter apps, best albums, greatest films, world’s richest, best colleges (no, wait, we’re not supposed to like this list). So, I thought I’d serve up a list for my audience.

The top 8 most popular polygons.

The idea for this list came to me while my kids were watching the DVD from They Might be Giants called Here Come The 123s. It features the song “Nonagon.”

I first posted this video back in September. I wrote:

(I feel bad for Heptagon, who apparently wasn’t invited to the party.)

I started thinking about that again. Both of my kids (one of whom is 2 years old) know what an octagon is, but I doubt my college students know the heptagon.

So, I decided to google the terms and see which polygons received the most hits. The more hits, the more popular the term.

There are a few problems. The first is that some of these words have nongeometric meanings like triangle and pentagon. Second, certain polygons have more than one name (rectangle, quadrilateral, tetragon, quadrangle).

To solve the first problem I entered the term geometry before the name of the polygon (for example I searched for geometry pentagon).* To solve the second problem I added the number of search results for each of the terms. Neither of these is a perfect solution, but hey, this is just a blog and not a submission to [name your favorite elite mathematical journal].

So here they are (drum roll, please), the top eight most popular polygons with 10 or fewer sides.

Here is a graph to illustrate the relative popularity of the n-gons. 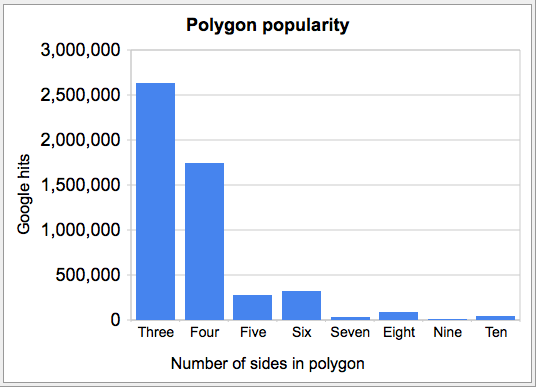 How are polygons named?

One thing I found interesting while searching for information about polygons was their naming conventions. Here is what I found.

Apparently there are two naming conventions (one with kai’s and one without). For example, a polygon with 47 sides would be called tetracontakaiheptagon or a tetracontaheptagon (of course, in practice mathematicians usually opt for the more compact and boring 47-gon). From what I can tell it was John Conway and Antreas Hatzipolakis who completed the namings up to the millions.

*At some point in the future I would like to play around with Google’s search, and figure out (to the best of my ability) how it deals with and/or/not/parentheses, and write about it on this blog. To give you a taste, I performed the following four searches and got the the following results: