Regular readers of this blog are probably well-acquainted with Euler’s beautiful polyhedron formula. Because I have written a few things about Euler’s formula, I get email about it from time-to-time. Most of the messages are very interesting and thought-provoking. The other day I received an email that asked:

…Is the Gibbs phase rule for Variables, Phases, and Components the same thing as the Euler rule for Vertices, Faces, and Edges?…

My first reaction was: what is Gibbs’ phase rule?

After conducting a little web research, speaking with a colleague in our chemistry department, and doing a little library work, I discovered that Gibbs’ phase rule is an extremely elegant formula that was discovered in 1870 by the chemist-physicist-mathematician Josiah Willard Gibbs. It is typically taught in a course on physical chemistry.

Below I give a brief explanation of Gibbs’ phase rule, then I remind the readers what Euler’s formula is, and finally I try to answer the question of whether they are the same.

Gibbs looked at mixtures of chemically independent components. An example of a 5-component system would be protein A, protein B, water, acid, and the salt of the acid. Let

be the number of components. These various components could each be present in one or more phases (solid, liquid, gas, etc.). We denote the total number of phases

. Gibbs discovered that the number of degrees of freedom in the system

(such as temperature, pressure, concentration) is given by the relation:

For example, consider the case

At standard pressure and

F, water is liquid, so

degrees of freedom. In particular, we can vary both the temperature and the pressure and the water remains liquid (this corresponds to a point in the interior of the region marked L).

On the other hand, if that water is

F and is kept at standard pressure, then it can coexist in both liquid and gas form, so

. Thus, there is only

degree of freedom. We can vary the temperature, but doing so would necessarily change the pressure. (Eg., as we heat the mixture, more liquid turns to gas and the pressure goes up.) This is illustrated by the curve dividing the regions labeled L and V.

Notice that it is possible for solid, liquid, and gas water to exist simultaneously in equilibrium. In this case

, so there would be

degrees of freedom. Such a point is called a triple point. (TP in the diagram above).

Finally, observe that when there is one component, it is impossible for four phases to coexist in equilibrium, for that would imply that

When there is more than one component present, then the various components can be in several different phases simultaneously and we can use Gibbs’ phase rule to determine the number of degrees of freedom to remain in that equilibrium state.

. Similarly, the dodecahedron (the polyhedron on the far right) has 20 vertices, 30 edges, and 12 faces, and

This formula has a long history and has been generalized in many directions. One generalization of Euler’s formula, and the one that will be useful to our discusssion, is to planar graphs. A graph is a collection of vertices and edges (as shown below). If a connected graph is drawn in the plane so that no two edges cross, then it divides the plane into faces. As with polyhedra, if there are

faces (counting the unbounded exterior region as a face), then

Are the two formulas equivalent?

Clearly the similarity between Euler’s formula and Gibbs’ phase rule is inescapable:

Are they the same formula in disguise?

Unfortunately, I think the answer is no. Let us think about what it would mean for them to be the same. It would give us a pairing such as:

(Or, because of the duality present we could exchange the roles of phases and degrees of freedom.)

However, each edge borders only two faces and has only two endpoints. This pair-wise relationship does not seem present in Gibbs’ phase rule. It would make sense if each component could only be present in two different phases and if each component was somehow paired up with two degrees of freedom. This is not the case (the triple point of water shown above is a counterexample).

There is a more basic problem. In Euler’s formula, we need

. But in Gibbs’ phase rule it is possible for the number of degrees of freedom to be zero.

It seems that there is no connection.

I should mention that there are several scholarly articles addressing this question. I have only tracked down one of them—the 1990 article “Euler’s formula and phase rule,” (subscription required) by T. P. Radhakrishnan in the Journal of Mathematical Chemistry. This author came to the same conclusion I did.

OK, so these two formulas are not equivalent, but they are the same formula. So we could use Euler’s formula as a means to remember Gibb’s phase rule—i.e., to create a pictorial mnemonic.

As above, we assume the relationship

But, to make things more intuitive we’ll use the terms points, connectors, and faces so the letters match up.

we draw a graph with

connectors (that I call a Gibbs flower), then we count the number of faces.

connectors, starting at the bottom of the stem and making as many petals on the flower as necessary. The number of faces (including the unbounded face) is the number of degrees of freedom. The only instance in which this technique breaks down is when

. Then we have a disconnected graph. In this case, we say, by convention, that

Some examples are shown below. 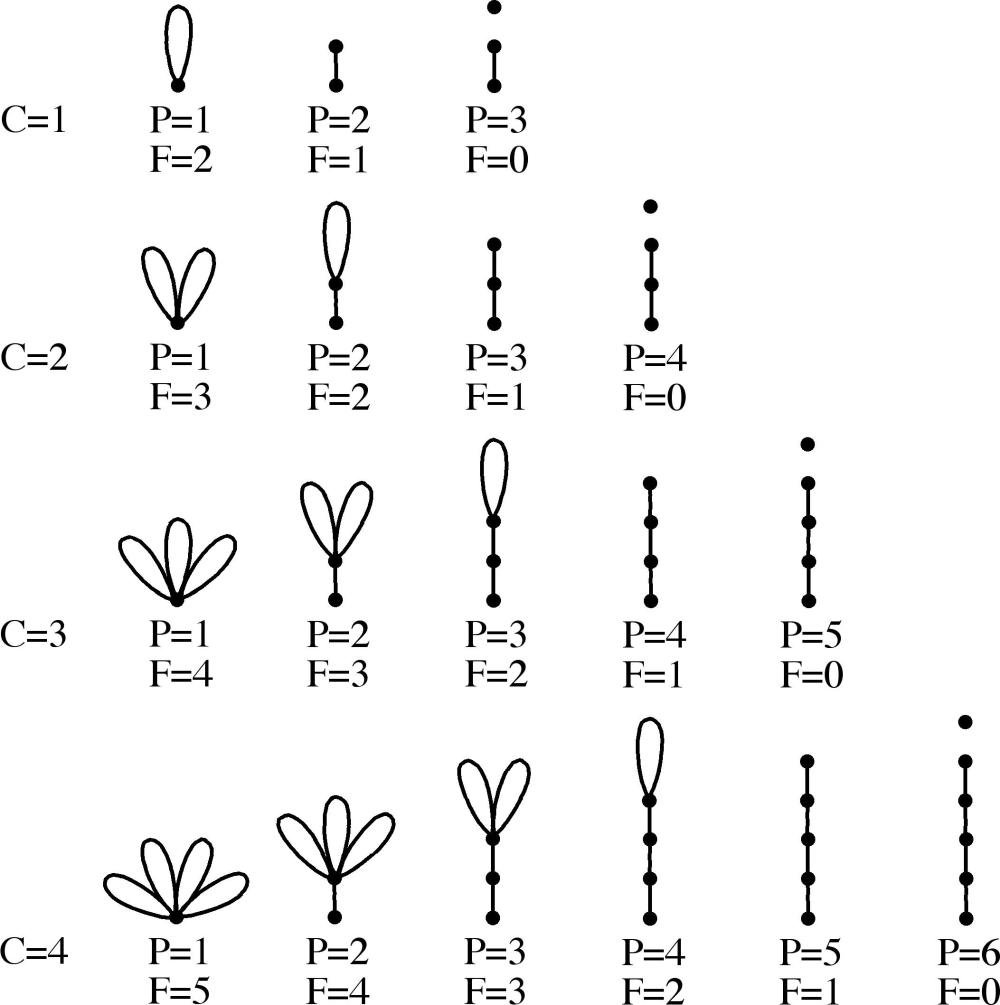 If anyone has any thoughts, ideas, corrections, suggestions, etc., please post them to the comments below.