Stand in front of a mirror and hold up your right hand. The person standing in the mirror holds up her left hand. Why is that? Why does a mirror reverse left and right? After all, it does not reverse up and down. 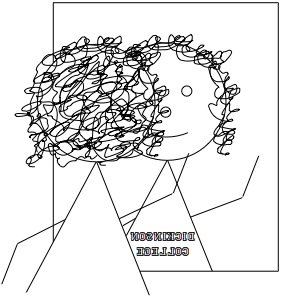 Before we answer that question, we have to ask a more basic one: what is “the right”?

Looking for an answer, I turned to the venerable Oxford English Dictionary (subscription required). I was disappointed to discover that the OED does not give a definition of the term “right”! Instead it gives the circular path shown below.

“Right” and “left” are a slippery concepts that are hard to define. In fact, you need to know other things about an object before you can determine its right and left. For example, if I handed you a blob-like sea creature and asked you which side is its right side, you may not be able to answer me. If I told you where the top and front sides of the critter were, then you could quickly identify the right side.

Here’s a mathematical explanation of what you would be doing mentally. Take the coordinate axes shown below, point the z-axis out of the top of the creature and the y-axis out its front, then the x-axis will point to its right. 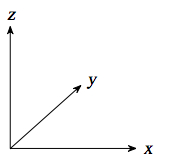 If you are familiar with vector operations in

, consider this procedure. Take a vector pointing out its top

and a vector pointing out its front

. Then the cross product of

is a vector pointing to its right,

The three directions, top, front, and right are mutually perpendicular and that if you know two of them, you know the third. For a person, a car, an animal, etc, the top and the front are unambiguous and intuitive. Then we use them to determine which side is the right side.

Now let us go back to the mirror. What does it really reverse? If you raise your arm, your reflection raises her arm. If you stick your right arm out to the side, the reflection sticks an arm out in that same direction. However, if you point at the mirror, then the reflection points in the opposite direction—she points back at you. In other words, the mirror reverses front and back!

When we see words in a mirror, they look like they are written from right to left, but that is because we are imposing our right-handed coordinate system on a left-handed mirror world.

I’ll end this post with some assorted thoughts about the left and the right.