American Honda paid for a viral marketing campaign in Lancaster, CA for the Honda Civic. They cut grooves in the road so that when a car drives over the road at 55 mph (in a Honda Civic, presumably), it will play Rossini’s William Tell Overture (yes, that’s the Lone Ranger theme song). 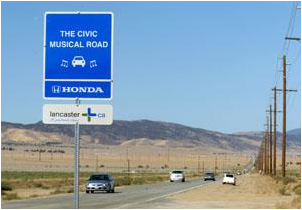 The “debut” of this musical piece was September 5, 2008. Unfortunately, the neighbors didn’t appreciate all the noise and neither did the regular commuters. So the town paved over the grooves after only 18 days.

On their website Honda has documentary-style videos showing the making of the musical road.

How does it sound? Here’s one of the many online videos of drivers “playing” the road.

(The mathematical connection? One of the team members was Paul Du Gre, a mathematician and musician.)