Over the weekend I attended a May Day party thrown by one of my colleagues.

During the party they had a traditional maypole dance. An example of a maypole dance is shown at left. A maypole is a tall pole with colorful ribbons attached to the top that are fanned out in a cone shape. The dancers hold the ribbons and dance according to the rules called by the party’s host (like a square dance). Some walk clockwise and others walk counterclockwise. When one dancer encounters another she goes under the other’s ribbon or lets the other dancer go under hers (according to the rules of the dance). As this is happening the ribbons wind around the pole, making a decorative pattern, such as those shown below. 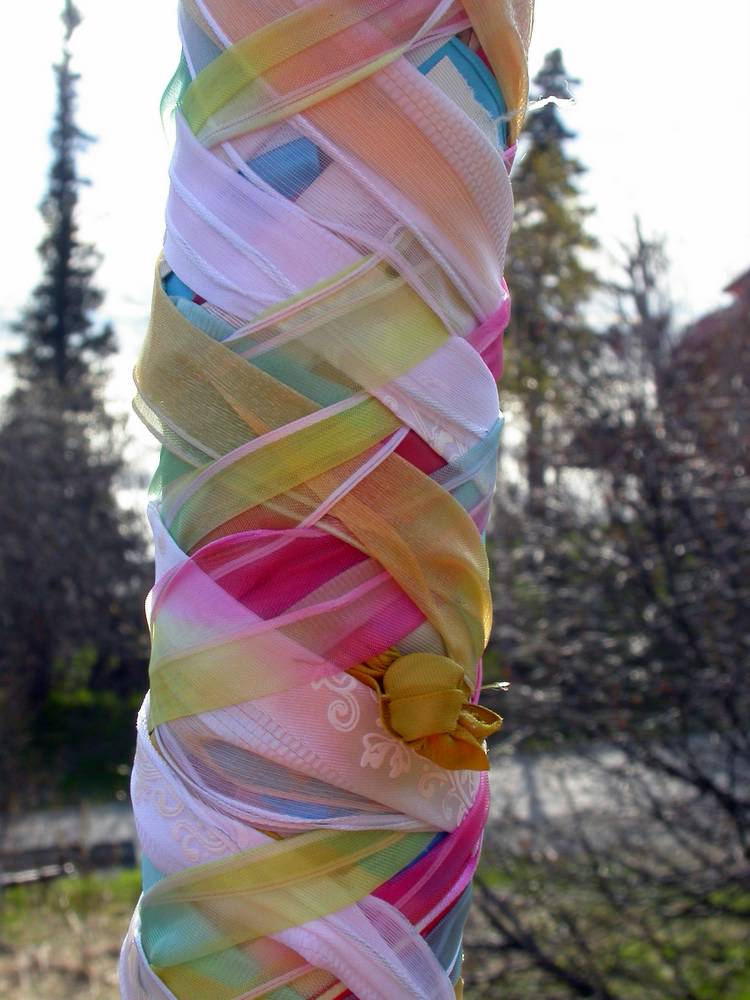 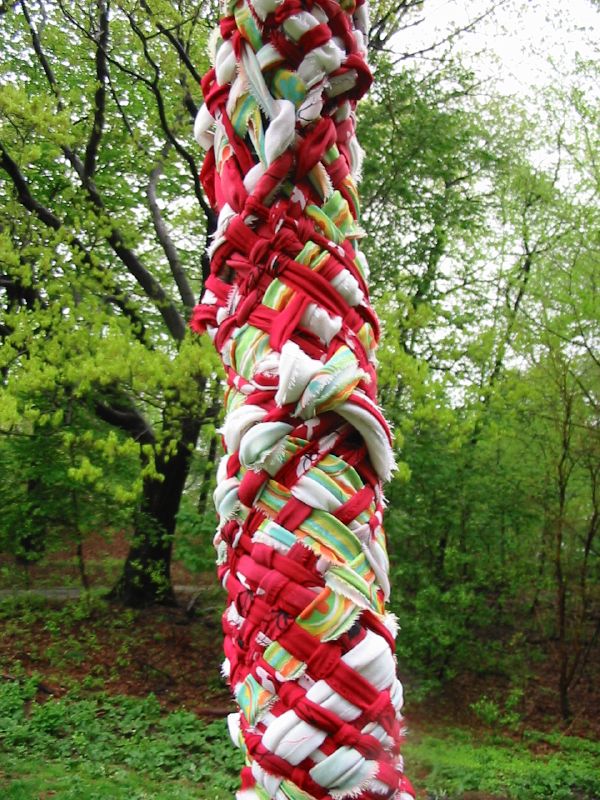 Having just taught the last day of my knot theory class the day before the party I couldn’t help but look at the maypole with a mathematical eye.

One of the topics in my knot theory course was the (Artin) braid group. A braid is a collection of

strings hanging from a rod, wound around each other, and attached to another rod below so that each string is always going downward (as in the picture below). Note that there can be no knotting in the strands because that would require the strings to move upward temporarily.

This is a bona fide group. The group operation is concatenation—i.e, to mutiply two braids, attach the second braid to the bottom of the first. The identity element is the braid in which all string run straight downward without any twisting. It is not difficult to see that each braid has an inverse. Moreover, the braid group is generated by elementary braids of the form shown below (called

th strand crosses over the

st crosses over the

For example, the braid notation for the braid given at the top is

), but generators do commute if they are far enough apart (as illustrated below). That is,

(this would also hold if either of the generators was replace by its inverse). This is called far commutativity.

There are three other relations among the generators; all three corresponds to the third Reidemeister move and are commonly called the braid relations. One of them is shown below; we can write it symbolically as 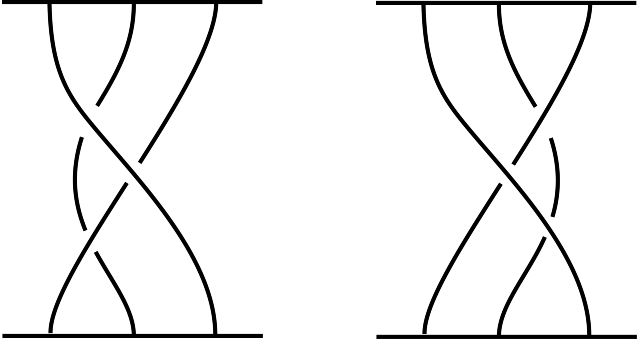 It turns out that these are the only relations, and thus it is possible to study the braid group purely symbolically.

is the group generated by

subject to the following relations:

The braiding of the maypole ribbons is an interesting twist (har har) on this classic idea. Instead of the string being attached to two line segments, they are attached to two circles and we do not allow the strings to pass through the axis running through the centers of the two circles (the maypole itself!). In particular, we now draw the projection of the braid on the surface of a cylinder. Below is an example of such a projection.

The braiding pattern that the party host coordinated went as follows. There were an even number of ribbons, so he had the dancers count off by twos. The 1’s walked counterclockwise and the 2’s walked clockwise. The 1’s went under the 2’s ribbons initially, then they went over them the next time, and they continued alternating from then onward. The resulting pattern is shown below. I’ve drawn the pattern on an annulus, which is topologically the same as a cylinder. (We can also think of this as the view of the maypole dancers from above.) 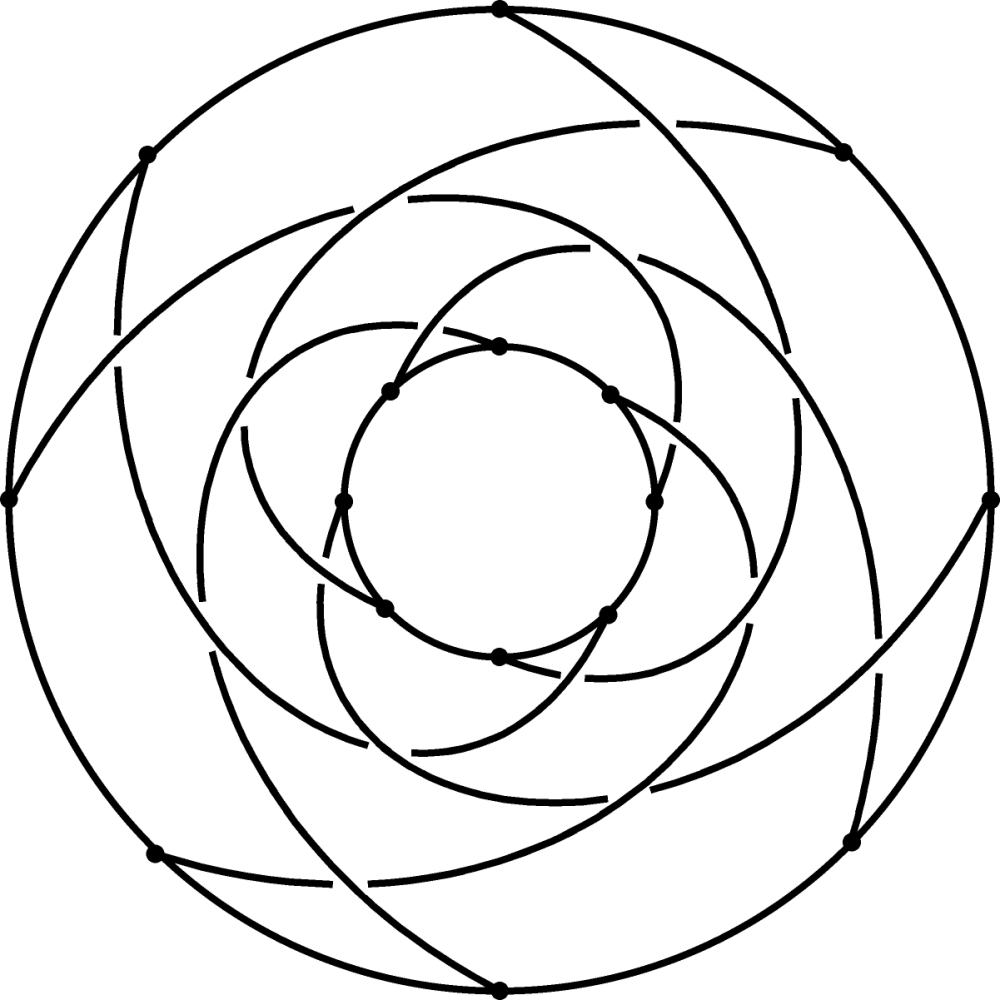 Clearly this maypole dancing generates a group, but it is not the usual braid group

. Can we define this group using generators and relations? At first glance it looks as if we can simply generalize the ordinary braid group with the added modification that the

th string is adjacent to the first string. In particular, there is a new generator

th string crosses over the first string. Then the same relations hold as in Artin’s theorem, but the arithmetic on the indices is performed modulo

. (I’m taking the inside circle to be the top of the maypole and the eastern ribbon to be ribbon #1.)

However, this does not describe all possible maypole braids. In particular, the three braids below cannot be obtained as products of the 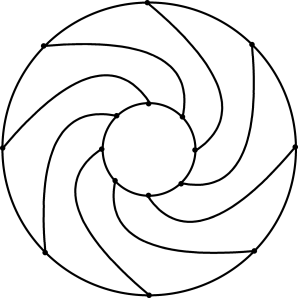 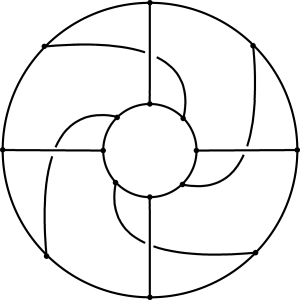 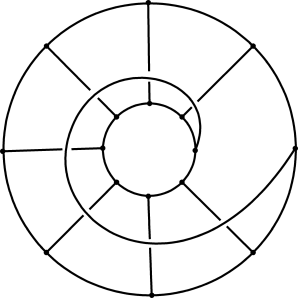 corresponds to the motion in which for all

th strand moves to the

). In other words, all the dancers rotate one space counterclockwise. There is a corresponding clockwise movement

. All three of the circular braids shown above can be generated by the

and the second is

. I leave the third one as an exercise. I’ll post the solution tomorrow. [Now posted.]

This new generator does come with new relations. In particular

(where the indices are modulo

Thus it seems to me that the group

and the following relations. (Again, we assume that the arithmetic for the indices are all computed mod