The four color theorem is a beloved result with a long and fascinating history.

The theorem says that four colors suffice to color any map so that no two bordering regions are the same color. The conjecture was made in 1852 by Francis Guthrie. After many, many failed proofs, the conjecture was finally put to rest in 1976 (using a computer) by Kenneth Appel and Wolfgang Haken. To this date there is no pencil-and-paper proof of this seemingly elementary theorem.

Today I was exploring the website of the Japanese publisher and puzzle-popularizer Nikoli. The website has a number of interesting Flash-based logic games (Kakuro, Nurikabe, Sudoku, etc.). They also have five four color theorem applets such as the one below. 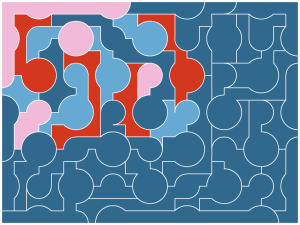 The goal of each puzzle is to find a four-coloring of the given map. I wish they had more than five of these!