I would like to try an experiment. If you like math, history, and can read French—read on!

I am interested in the so-called “problems of antiquity”—squaring the circle, trisecting the angle, doubling the cube, and constructing regular polygons. If you look in reference books, we now know that three of the four problems (all but squaring the circle) were proved impossible in 1837 by a French mathematician named Pierre Wantzel (1814–1848). I emphasized the word “now” because his contribution was largely ignored for over 100 years!

There has not been much written about Pierre Wantzel, especially in English. For instance, he does not appear in the massive 27-volume Complete Dictionary of Scientific Biography, and his Wikipedia entry is very minimal. The MacTutor site has the most thorough treatment I’ve seen. About 100 years ago Florian Cajori wrote an 8-page bio in the Bulletin of the AMS. In it, he cites three 19th century French sources. So far I’ve tracked down two of them.

I have a passable knowledge of French. It has been many years since I’ve studied French, so I can slowly go through and puzzle out a French math document. But it takes a while and I’m not always confident in the outcome. Fortunately, online translators like Google Translate and Microsoft Translator have gotten much better, so they provide a quick way to get the gist of a document in another language.

So, I took the two French articles, copied-and-pasted them into a Word file, cleaned up any errors, used the online translators to get a first approximation of the translation, and then started cleaning them up. Then it occurred to me: Maybe this would make a good crowdsourcing project. This is where you come in.

I made Latex files of these two documents, split them into two columns (French on the left, English on the right) and posted them to ShareLatex. I made them publicly editable. If you are interested in working on this translation project—go for it. I have no idea what is going to happen. It may be a huge success, it may be a disaster, or it may be somewhere in between. We may have one person do almost all the work or we may have an end-product that is the work of many people. If you work on this, leave your name as a comment at the start of the document. We’ll see how this goes! You can post comments, questions, and suggestions in the comment section at the end of this blog post.

Here’s the first document: the original 11-page article and the . It was written by one of Wantzel’s collaborators, Jean-Claude Saint-Venant in 1848 shortly after Wantzel died. [UPDATE! I found out that there’s already a translation of this one online! So, I copied and pasted that version into my Latex file and gave the proper citation; here is a pdf version.]

Here’s the second document: the original 3-page article and the editable Latex. It was written by A. de Lapparent in 1895. 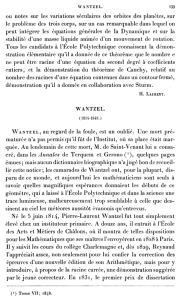 Thank you! I look forward to watching this take shape.